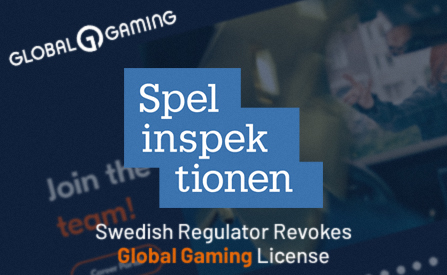 The Swedish gambling regulator is incessantly, carefully monitoring the situation of the gambling industry, making sure that everything functions effortlessly. Still, there are companies that are unable to hide some irregularities and therefore, get caught.

Who is Guilty this Time?

Namely, just recently, Spelinspektionen, discovered that Global Gaming hasn’t been doing their business properly. According to some reports, some “serious deficiencies” have been found that are in correlation with responsible gambling and anti-money laundering measures.

Now, SafeEnt, the holding company of Global Gaming, must stop all Swedish operations immediately! For quite some time, it had been running two major casinos, Spellandet.com and Ninja Casino through online casino and sports betting licenses that it acquired last year in December.

In its evaluation, the regulator uncovered that there were some serious breaches of regulations and ten players and their activities were especially in focus. This triggered some actions, such as Global Gaming supplying the Swedish regulators with important documents.

What did those players do? Namely, it was revealed that each of them spent substantial amounts of money via Global Gaming’s brands and unfortunately, this operator didn’t do anything to uncover the source of their cash or to address their high levels of spending.

According to the law of this country, users have a certain limit when it comes to depositing money and in case someone exceeds SEK10,000 ($1,053), licensees are obliged to contact that person.

The data that Spelinspektionen received showcases that two individuals have lost between SEK50,000 and SEK1.1m in just one week! Global Gaming admitted that it didn’t have any limit until January 14 and that at that moment it introduced the limit of SEK8,000.

Finally, this just goes to show that it has infringed several regulations, such as Chapter 14 Section 7 of the Games Act, as well as Chapter 11 Section 3 and 5 of the Game Ordinance, and Chapter 9 Section 10 of its own rules and general advice.

Sticking to the Rules:

Even though GG allegedly wanted to implement plans that would help them deal with this issue, the regulator claims that Global still didn’t follow the rules of their plan. It commented on this topic by stating:

“Spelinspektionen finds it remarkable that SafeEnt has not taken any measures related to the duty of care despite the customers’ exceptionally high deposit limits combined with the extensive gaming. All customers in the review lost between SEK240,000 and SEK 1.1m for one month.”

This entire assessment accentuates the negative traits in terms of anti-money laundering measures. Furthermore, Spelinspektionen said that they didn’t carry out any risk evaluation when it comes to their business as they were required to the Swedish Money Laundering Act.

Furthermore, this seems to be a huge mistake due to the fact that they would not be able to take any crucial measures to decrease any risk of money laundering by utilizing their services and products.

All these things forced the Swedish regulator to take their license away because their safe measures were practically non-existent in this casino’s offering. Spelinspektionen added:

“Due to the fact that the company has not fulfilled what is required regarding the requirements for duty of care and deposit limits, it has violated some of the most central parts of the game law which are aimed at protecting the player against excessive gambling.”

“SafeEnt has described what measures it intends to take to correct the deficiencies, but the Spelinspektionen considers that the measures are not sufficient, and notes that SafeEnt lacks understanding of important parts of the regulations that govern the operations.”