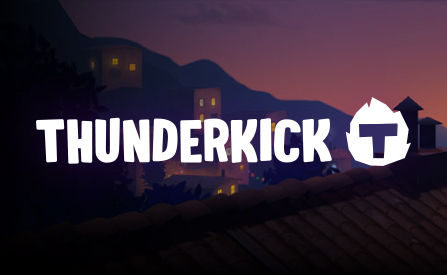 Unlike many other small gaming studios, Thunderkick has sworn to stay an independent gaming studio until the very end. This gives them the freedom to implement their own vision on the online slots they produce. Or rather, they don’t have to listen to anyone else but the customers when it comes to making the best possible online slots.

This is not to say that the company would be unwilling to partner up, on the contrary, you can find them on all the important aggregator platforms and online casinos. They’ve spent a long time building up these partnerships, relying on the proven quality of their games. For players, every new release is exciting news with great promises of something new and entertaining to try out.

The company was established in 2012. Their studios are located in Stockholm, Sweden since day one. The headcount has grown quite a bit since the first days, but we’re still talking about a medium-sized studio. Thunderkick is solely an online slot producer, though obviously, they do pay attention to their own platform. The purpose of the latter is to make sure the games integrate seamlessly into any online casino.

The interface plays a big role in playability, and with Thunderkick that applies to both mobile gaming and desktop gaming. Thunderkick holds licences from Malta, UK and Romania, and have recently added the Netherlands to the list. So it’s not all about designing perfect slot features, it’s also about making sure that the whole experience is resting on steady foundations. It’s no fun playing games that come with clunky controls or questionable certificates. This might be a small studio, but they have definitely spent a lot of time thinking about the big picture.

With their presence in the market established, their game-making process proven to be working wonders, and the players enamoured with the games, there’s no limit to what Thunderkick can do. We suggest you take a look at the games and no deposit bonuses you can find here. 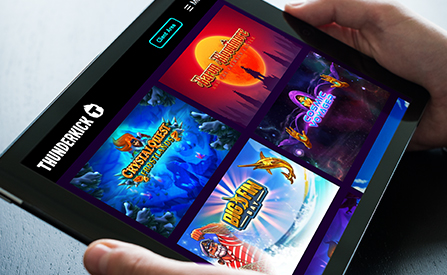 New online slots from Thunderkick are released on average every two months. Sometimes it might take a bit longer than this to ensure that the end-product adheres to the high internal standards the company swears by. Those standards have resulted in some truly outstanding slots.

Like with most other gaming companies, the main part of the gaming catalogue is made of high variance slots. You will find the odd one out here and there, but the name of the game with these games is to go after the big wins. Though these are no progressive jackpots, they can still reach quite high peaks for the maximum wins. The good return to player figures certainly helps with this.

The games are pretty nice to look at, and your ears get a treat too. Sound effects live with the spins, whilst graphics and animations make sure that all the events worth noting will catch your eye. The range of themes takes full advantage of this know-how, and you get to witness a wide variety of settings. From ancient seas to folk tales, mythologies, magic and fruity and sugary settings. It’s not just different symbols and background pictures, but different styles too.

By far the most common setup is payways, which uses interconnecting symbols that create the winning payways automatically. But you will also find quite a few titles that use the traditional paylines, with the associated bet per line and other factors. Altogether the selection is extremely versatile and provides a bit of something for everyone, and everything for someone who likes a bit of something. 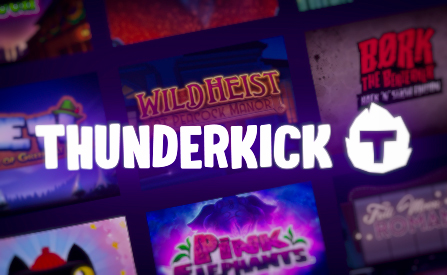 Bonus spins are by far the most common feature, and that holds true for these online slots too. But what else can you expect? Mystery symbols for one, which themselves can cause all sorts of effects. For example, they can be collected to activate bonus meters with stackable specials, or they simply replace other symbols on the reels with matching ones. Stacking symbols, wilds, multipliers, scatters, instant wins, and many other features ensure that you won’t run into the same setup twice.

No deposit bonus is always an excellent way to test out online slots, new and old alike. Pick your favourite no deposit casino from our extensive list, and you’ll be off to playing Thunderkick slots in no time. You have two options here, either go for bonus spins or bonus cash.

The thing with those spins is that they are usually only available for selected games. Some online casinos will deliver more on that front, whilst others will simply offer extra spins for true and tested online slots. Luckily, cash can be played on almost every slot, and it is far easier to withdraw no deposit bonus cash.

1. Does Thunderkick produce games other than online slots?

At the moment, the company is entirely dedicated to producing online slots. It’s worth noting that while the catalogue is small, it is vastly more diverse in types of games than even with some of the bigger software companies.

2. What are the maximum wins in these games?

There is no figure that would fit all of the slots. In general, high variance titles tend to begin from 10 000 x your bet, with the upper range being around 20 000 x bet. Low variance is, understandably, much lower than this, often topping around 1000 x bet.

3. Where can I play Thunderkick slots?

Where can’t you play them? Just take a look at our suggested no deposit casinos, and pick one that offers what you’re after.

4. Are Thunderkick slots available in US casinos?

At the moment, US casinos do not offer Thunderkick slots. We will keep you updated should the situation change.

5. Are these slots safe to play?

For a small studio, the company has quite an incredible amount of licences. We are certain that this proves beyond doubt that the slots are safe to play.