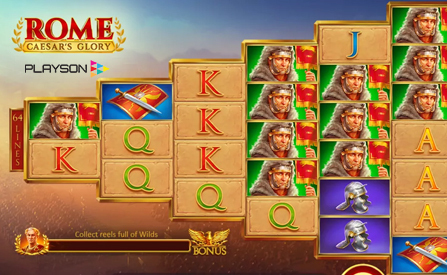 A unique game, it features reels shaped like a pyramid and 64 paylines. Its central theme is, of course, ancient Rome and it has one of Rome’s most legendary emperors, Caesars, as a Wild symbol.

During extra spins, the Caesar Wild will expand…

…which makes winning the extra spins bonus round extra enticing, as it contains some mighty big wins, should the winning combos prove successful.

Also included in the game is the on-screen progress bar that increases when you complete a full reel filled with Wild symbols. Once the bar is fully loaded, the player receives Bonus Extra Spins and has even more chances to win hidden treasures.

Thrilling features continue with something very special during extra spins – during these, the reels are flipped which gives more starting points for winning lines and increasing winning opportunities.

As part of game release celebrations, Playson hosts a big money tournament which is entirely dedicated to the new slot. The Christmas March is the first phase of the Christmas Story series of network tournaments by this developer. The total prize pool will be EUR 20,000 and ends today, December 16th.

“With its 64 lines, we’re sure that Rome: Caesar’s Glory will be a massive hit with Playson fans on the search for huge wins.

Our big money tournaments have been incredibly popular and having one dedicated to our new title will really get players excited about the new game and I wish everyone the best of luck in the competition.”

A Deal With Royal Panda:

Playson has signed a deal with Royal Panda ...

…according to which the full suite of games by this provider will be delivered to this online casino.

This includes titles such as Clover Riches, Solar Queen and Vikings Fortune: Hold and Win as well as Timeless Fruit Slots.

“Playson is well-respected in the industry and its games will undoubtedly complement our existing offering. I know our players will enjoy the company’s latest titles and, like us, will also look forward to seeing what else they have in store over the coming months.”

Playson’s Sales Director, Blanka Homor, added that her company is always striving to improve the reach of their games and is confident that this will help in that regard.

She added that it is another step in strengthening this brand with the best operators while positioning themselves to become one of Europe’s leading suppliers.