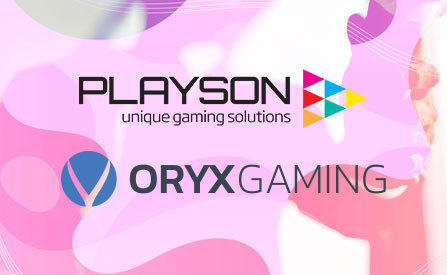 Playson has been working hard on establishing a presence in newly regulated markets around the world.

…roster, including providers and operators alike. Its latest deal with ORYX Gaming is a product of this effort.

Playson, a company with the offices in the United Kingdom and elsewhere, is one of the latest brands to join forces with ORYX. The two companies have recognized the potential of mutual cooperation, especially when it comes to getting the right content to the right operators in highly competitive markets around the world.

Playson will be sharing its content with its new partner who will, in turn, distribute it through its exclusive Hub.

As far as ORYX goes, they are getting a…

…solid boost in terms of quality content as Playson is one of the most popular providers in the industry. Some of the slot game titles that will soon go live across the Hub aggregation platform include Solar Queen, Rome: Caesar’s Glory and the complete Funky Fruits series of classic slots.

Aside from the gaming content, Playson will also be offering its promotional tools as well as its jackpot features. By signing with its new partner, it is gaining access to a massive pool of operators who are associated with this popular aggregator. Such an increase in exposure goes along with its effort to enter various regulated markets around the world.

Blanka Homor, Sales Director at Playson, said: “ORYX Gaming and its aggregation platform is well respected in the industry and we’re thrilled to have partnered with them. This content deal will see our audience grow even wider and we look forward to developing our partnership with ORYX in the future.”

Matevž Mazij, Managing Director of ORYX Gaming, said: “Our primary focus is delivering the best games to our customers and Playson’s slots will be a fantastic addition to our portfolio. With its vast array of titles and popular engagement tools, we look forward to expanding our offering with its immersive games.”

Playson is one of the leading software providers in the iGaming industry. The company is known for its cutting-edge content that mainly comes in the form of high-end slot games. Its titles can be found in over 17 regulated jurisdictions around the world while this company operates directly in Malta, Spain, Italy, Sweden, and many more countries.

This latest deal will allow it to reinforce its presence in these markets, bringing in new user pools. The team behind the company operates from several European countries and is constantly striving on delivering innovative, better gaming content.

ORYX Gaming Goes Live with Superbet in the Romanian Market