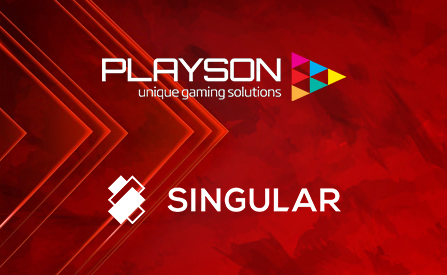 Playson, a premier software provider in the iGaming industry, has signed a content deal with Singular.

The signed agreement will allow the developer to…

…offer its latest partner’s platform. As a result, this company is getting a significant boost in reach across various regulated markets.

Playson is continuing its campaign of expansion with the addition of Singular to its network of distributors. This provider with teams in the United Kingdom, Greece and elsewhere, has had a good start in 2020, adding several important operators to their roster of partners. Despite the ongoing crisis that is enveloping the world, Playson is doing its best to look past the current hurdles and look towards the future.

The deal falls within Playson’s current effort to expand into as many regulated markets as possible. Singular is a valuable partner that operates a large content aggregation platform. They offer services and content to numerous online casino operators who are present in more than 10 regulated markets. As a part of the new deal, it will soon gain access to some of the most popular titles the supplier has to offer.

Its clients and ultimately the players will…

…have a chance to try out Solar Queen, Clover Riches, as well as the all-new Funky Fruits series. These are just the heavy hitters. It goes without saying that Singular is getting a solid boost in its offer. Despite operating one of the largest platforms in the market, the new content is definitely going to give this brand a more competitive edge in the market.

Blanka Homor, Sales Director at Playson, said: “Diversifying Playson’s routes to market is a cornerstone of our strategy, so we are thrilled to be working with a prominent platform provider such as Singular. With access to a range of tier one operators in several regulated markets, the supply agreement with Singular demonstrates the widespread interest in our portfolio among both players and partners.”

Robert Dowling, CCO at Singular, said: “We are always looking to work with the industry’s best content developers, so we are delighted to bring Playson on board. The supplier is well-positioned to meet the demands of our operator partners and their players, who will undoubtedly enjoy its immersive games.”

Playson is one of the leading software development studios in the iGaming industry. The company currently operates in 17 regulated jurisdictions and offers a portfolio of over 65 omnichannel casino games. It consists of teams located in the United Kingdom, Greece, Ukraine, and Malta. Fully dedicated to quality and innovation, Playson takes pride in building a massive distribution network.