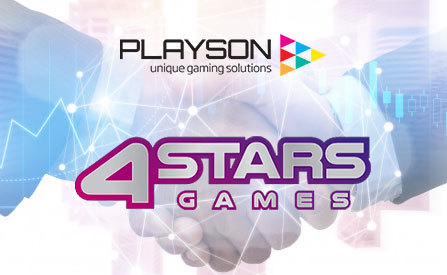 Playson has added a new partner to its ever-growing list of distributors. The company in question is 4stargames. With a new deal inked, both sides are looking at significant gains in…

Playson’s policy of expansion has grown its distribution network by adding 4stargames to its list of partners. This operator is currently establishing a strong presence in…

…key markets such as Germany, Canada, Ireland, and others. With the new content available, players from these markets will be able to access some of the best slot games the developer has to offer.

This provider is especially known for its Timeless Fruit Slots series that has brought the company a lot of positive press. On top of those, 4stargames will soon be offering crowd favorites such as Solar Queen, Vikings Fortune: Hold and Win, as well as Mighty Africa: 4096 Ways.

The deal with 4stargames comes at the heels of several such deals that the supplier has signed in the past several months, with the Betzest one being among the more prominent.

Playson has started a somewhat aggressive expansion campaign aimed at bringing their content to new markets around the world. The company is looking to establish a presence in newly regulated gambling spaces, but also improve its presence in existing markets.

Blanka Homor, the developer’s Sales Director, has offered insight regarding the new deal: “We’re really pleased to have partnered with 4starsgames and are sure our slots will prove popular with the casino’s player base. We are developing some real momentum now, with the number of operator partnerships increasing every month. It is an exciting time for the company and we’re looking to build on our recent success in the coming months.”

Dimitris Chatzidakis, Head of Marketing for 4starsgames, also commented on the partnership: “Playson’s games are a fantastic asset alongside our existing content, and we’re thrilled to have them on board. We’re looking forward to offering our customers the very best in gaming from the company’s innovative portfolio.”

Playson’s content will go live across 4stargames online casino shortly thanks to its efficient API.

Playson is one of the industry’s leading software developers focused on creating and producing top tier slot games. The company currently offers over 60+ omnichannel games that are supported by a large array of promotional tools and other content management solutions. With a presence in key markets such as Sweden, the UK, Spain, Italy, and others, it has become a valued partner in the industry.

It is currently working with a number of top tier operators from around the world, servicing a vast number of end-users through their games.

With a team of highly dedicated professionals working in Ukraine, Malta, UK and Greece, it is constantly on the edge of industrial and technological advancements in their niche. Such a performance has helped them grow their distribution network considerably since 2012 when this company was founded.