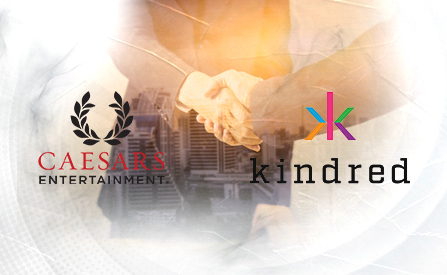 Kindred Group, a prominent online gambling operator, has set its sights on North America. The company is looking to establish a solid presence on the North American continent by…

…finding partners in key regulated markets. The deal with Caesars is the latest step towards that effort.

Kindred has defined the emerging regulated markets in the United States as one of its key goals moving forward. With that in mind, the company has already created a foothold in New Jersey and Pennsylvania through its Unibet brand.

With more states joining the fold with their own regulated markets, Kindred has decided to pursue potential partnerships in Indiana and Iowa. Caesars Entertainment…

…will be facilitating Kindred’s operations in Indiana while this entertainment industry giant signed with Harrah in Iowa.

Thrilled to Extend US Presence:

Manuel Stan, SVP Kindred US, added his comment regarding the new deal: “We are thrilled to further extend our presence in the US together with one of the world’s most renowned and diversified casino-entertainment providers. Caesars’ geographical spread in the US gives us a unique opportunity to build our footprint, with Indiana and Iowa next in line and potential other states lined up. We also share Caesars’ vision to offer customers an unforgettable experience where every guest is treated like a Caesar.”

Kindred has shown intentions to fully commit to regulated markets in the United States. This online casino operator promises to bring…

…a variety of sports betting services and slot games to these markets, thus becoming one of the more competitive brands in the area. With that said, it has extended its partnership with Pala Interactive after the company experienced a successful launch in Pennsylvania.

Kindred Group is a massive online gambling operator that runs a total of 11 brands. These include their flagship Unibet brand and many others. The company has been…

…around since 1997. The company grew and expanded its reach into various regulated markets. Over time, the Group became one of the largest entities of its kind in the industry. Its brands are licensed to operate in just about any regulated market.

It offers one of the most expensive libraries of slot games as well as other gaming content. This group also offers sports betting, online poker, and online bingo services through its online casino brands.

By establishing an early presence in the United States, the company is becoming an integral part of an evolving market that has plenty of potential for future growth.