Playson Announces a New Partnership with 888casino, Reinforces its Position in Europe 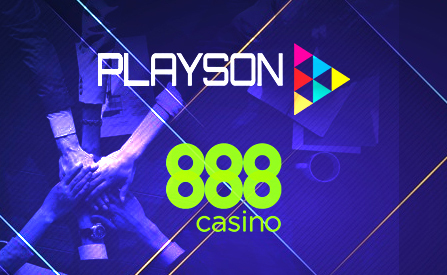 Playson, one of the premier software providers in the industry, has announced that it had signed a new partnership agreement with 888casino. The two companies have agreed…

…on a content deal that will allow Playson to expand its reach in key regulated European markets through the operator’s presence.

Playson is continuing its push for a stronger presence in the European continent. This company has been making efforts to reach new and expand its reach in existing regulated markets. One of the latest fruits of that labor comes…

…in the form of a content deal that this provider has signed with 888. The developer will be offering its entire portfolio of games to its new partner, including the latest game to hit the shelves – Fruit Xtreme.

In return, 888casino will be releasing the new content in Sweden, Spain, Denmark, Romania, and Italy during the first quarter of this year. All of the releases will be…

…facilitated via Pariplay’s platform, thus offering quick and easy integration into existing systems. Adding one of the oldest and most trusted casino operators to its network of distributors has made Playson’s position in the market that much stronger.

Christos Zoulianitis, Senior Account Manager at Playson, said: “We’re thrilled to be joining forces with an operator as well-established as 888casino. The company has been at the forefront of the online gaming industry for over a decade. Our portfolio of games will be a great addition to its offering, and we are excited to be further extending our reach across Europe.”

Guy Cohen, Senior Vice President of 888casino, added: “888casino is focused on expanding its offering to customers by developing in-house games and adding third-party content to its unique platform. Playson has a fantastic team which have developed a unique portfolio of slot games, including classics such as Solar Queen and Red Chilli Wins. We are excited to add these games to 888casino which will enhance the player experience.”

Aside from the aforementioned launches, the supplier expects to release its portfolio of games to the United Kingdom and Gibraltar territories through 888’s online casino operations in those countries as well. However, these releases are scheduled to happen later this year.

Playson is a premier software provider that offers various gaming solutions to the iGaming industry. The company currently operates in a variety of…

…regulated markets including some of the most competitive environments out there. It offers a wide range of omnichannel games within its portfolio. Players from all over the world can experience 60+ titles but also a whole array of promotional tools aimed at making their gaming time that much better.

The developer currently employs a massive team of professionals in several countries including Malta, the UK, Ukraine, and Greece.