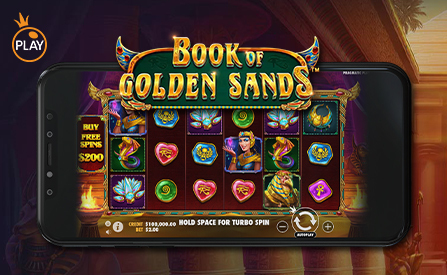 Welcome to The Book of Golden Sands, an epic new slot game from Pragmatic Play. This magical game is set in ancient Egypt, and it's full of treasures and hidden wonders. With high-paying symbols depicting Ancient Egyptian gods, Cleopatra and snakes among others, players can easily unlock wins. To help you on your quest, there are many bonus features. With so many ways to win, this is one slot game you won't want to miss! We hope you enjoy your journey through the sands!

Step into the world of the Book of Golden Sands and see if you can uncover its secrets.

This game features 6 reels, 3 rows and 729 active paylines, making it one of the most action-packed slots around. With an RTP of 96.46% and a maximum win of 10,000x your bet, there's plenty of treasure to be found. This high volatile slot has several bonus features such as Expanding Reels, Extra Spins, Book Scatters, and Multipliers.

Chief Operating Officer at Pragmatic Play, Irina Cornides added:“We are excited about the launch of Book of Golden Sands™, as we have augmented and adapted the traditional book-style game that many players are drawn to. We have included wild multipliers, an engaging feature which awards additional ways in the bonus game, and a universally adored Egyptian theme to create a title that we are confident players will enjoy.”

Getting to Know the Slot Developer

Founded in 2013, Pragmatic Play has quickly made a name for itself in the online gaming world. Their products are now featured on over 100 well-known gaming sites around the globe, and their cutting-edge software is loved by players for its intuitive design and exciting gameplay. Whether you're looking for classic casino games like blackjack and roulette or more modern offerings like scratch cards and video slots, Pragmatic Play has something to suit your taste. With new games released every month, there's always something new to discover at Pragmatic Play!

Pragmatic Play Goes British in Online Slot Down the Rails

Enter the Ancient Egyptian World with Queen of Gods

Check Out Mighty Cats with Cleocatra