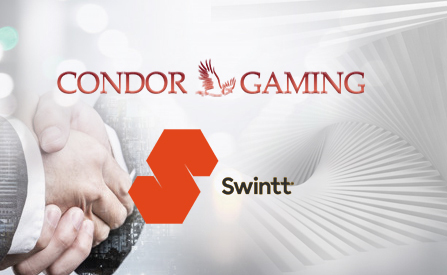 Swintt is resuming its campaign of expanding the distribution network to include new partners all over the globe.

…Condor Gaming. The two have signed a content deal, giving the operator access to the developer’s entire network of slot games and more.

Condor has pledged to launch Swintt’s popular slot game titles across its range of casinos. As a result, the latter will be gaining more exposure in key European markets, which is exactly what this young studio has set out to achieve.

The deal will see Swintt sharing over 50 games from its portfolio with Condor. Titles such as Panda Warrior, the upcoming Everlasting Spins and a number of land-based slot will become available through Rembrandt Casino, Big5 Casino, 24Bettle, b-Bets, and Casino Sieger.

By becoming a provider for Condor, Swintt is going to bolster its presence in key European regulated markets. The company has been making great efforts into establishing a reputation in the industry, which greatly depends on Swintt creating a solid distribution network.

David Flynn, CEO of Swintt, offered his comment on the partnership: “We are thrilled to announce this partnership agreement with Condor Gaming who have been a successful and growing operator for a number of years. Seeing our range of products including our localized content for major European markets available to their players is very exciting for us and we see a long fruitful partnership ahead of us.”

Oliver de Bono, COO at Condor, also shared his insight on the new partnership: “Since first meeting Swintt we have found their portfolio of products very exciting and we are delighted to announce this partnership. Their diverse range of content and gamification tools aligns perfectly with our strategy while enabling great experiences for our players and anticipated growth in 2020.”

Swintt is one of the latest software providers to join the industry. Founded in 2019, this company has made waves on the market by releasing a number of innovative slot games in a very short time frame. It is headquartered in Malta and employs a team of over 70 talented professionals all over the globe. With a very modern take on the industry, this studio has recognized several avenues by which they could offer something new to players worldwide. So far, their slot games have proven that it is perfectly capable of going against the top players in the iGaming sphere.

Furthermore, this company has managed to pull together a diverse network of distributors around itself despite being barely a year old at this point.

Swintt Has Added SuprNation to its List of Distributors

Swintt Bags a Landmark Deal with SoftSwiss, Widens Its Horizons

Swintt Goes Live with a Landmark Content Deal, Partners Up with GiG