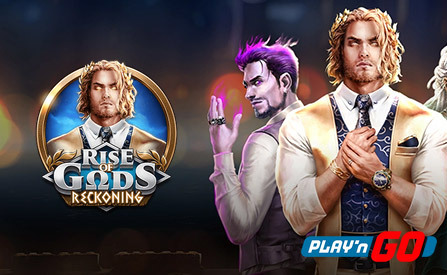 Rise of Gods: Reckoning is a new casino slot from Play'n GO that transports players to a parallel universe where the Greek gods Zeus, Hades, and Poseidon have imprisoned their father Cronus and now live among mortals on planet earth. This alternate reality provides the backdrop for an exciting gaming adventure in which players can win decent prizes with the help of bonus features. The visuals are impressively realistic, providing an immersive experience that will keep players engaged for hours on end.

Come and join the fun with Rise of Gods: Reckoning. This exciting game has 5 reels, 3 rows, and 20 active paylines. Players can choose to make a minimum bet of $0.20 or go all out with a maximum bet of $100, so there's something for everyone. This is a medium volatile game packed with an RTP of 96.20%. As for the bonus features, there are multipliers, scatters, wilds, extra spins, and a bonus round.

If you're looking for a new and exciting way to win big at an online casino, be sure to check out Rise of Gods: Reckoning. You won't be disappointed!

Head of Games at Play’n GO, Charlotte Miliziano said: “We’re always looking for ways to push our characters to their full potential, and origin stories are a great way to give characters more motive, but also immerses players further into the stories, adventures that these characters go on. The player gets to come along for the ride.”

Play'n GO is a Sweden-based provider that has been in the iGaming industry for over 20 years. In that time, they have become one of the most popular and well-respected providers in the world. Their games are known for their quality and uniqueness, and they have a large portfolio of popular slots, including Tome of Madness and Riche Wilde. Play'n GO was launched in 1997 and operated as a subsidiary of various well-known companies until 2005, when they became an independent company. They were developing games for land-based casinos and later they changed their focus to the online casino industry. Today, they are one of the leading providers in the iGaming industry and are present in many regulated markets across the world.

Spin Dimension Casino Offers up to a 20% Cashback Bonus Every Week!

Get Lost in a Mexican Parade with Online Slot Puebla Parade