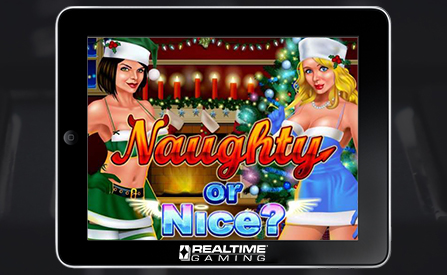 Naughty or Nice III is the new video slot release from RTG, which combines Christmas with something a little hotter…

…But you’ll have to wait a little while longer before indulging in a spot of frolicking, what with RTG finalising gameplay. The new release promises to be a hit, what with the two previous releases being too hot to handle! Boasting a seasonal theme with added summer sun is what makes the Naughty or Nice slot franchise so popular – oh, that and the possibility of landing big sacks of cash…

…Sacks bigger than Father Christmas can carry in his sleigh!

The two earlier releases feature a base game jackpot and more than one progressive jackpot – so we hope to see this packed into the upcoming slot release.

The features promise to be fruitful, with the two voluptuous females able to trigger wild reels or scatter pays. Christmas is set to be a wild one, what with the two vixens inviting you to play! Keep your eyes on Sloto Cash Casino and Uptown Aces for its anticipated launch.

Head to Sloto Cash Casino, Uptown Aces or Uptown Pokies before the 15th of December, to take part in a thrilling promotion which will award plenty of bonuses and extra spins…

…From now until the 15th of December, new players are invited to join a treasure hunt, which starts off with a 100% deposit bonus and 50 free spins. Once you’ve played this through, you can continue digging for gold with a 150% bonus and 100 spins. Finally, your reward for collecting both deposit bonus is an additional 200 spins.

Here’s How to Claim:

Spun Gold Tournament is a promo which is coming to an end over at Miami Club Casino, but the good news is that you can still take part…

Running until the 25th of November, players can take part in the Spun Gold promo with a prize pool of $1500. Here’s the details:

- And it’s available to all players.