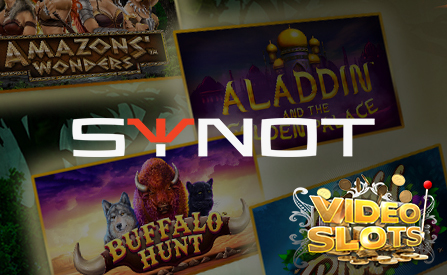 SYNOT Games, an online casino provider from Slovakia, has announced a partnership deal with leading online casino provider, Videoslots. As part of a recent agreement between the two brands, Videoslots has integrated the latest titles developed by the provider including DiamondZ, Respin Joker 91, Pixel Reels and others. The deal also includes several of the supplier’s top-performing slots, such as Book of Secrets, Joker 40, and more, which the operator will add to its suite in the coming weeks and months. SYNOT is a trusted casino provider and holds licenses issued by the Maltese Gambling Authority and the United Kingdom Gambling Commission plus they hold licenses from several other European countries. The brand has gained a lot of attention with its great games over the years which helped them to grow their business across Europe.

SYNOT Games offers a set of over 70 premium games that are translated in 28 languages, and its titles can be played in over 150 online casinos in Italy, UK, Spain, Sweden, Denmark, Portugal, Latvia, Croatia, Czech Republic, Lithuania, and more.

William Ahlberg, Head of Commercials at Videoslots, said:“We’re very pleased to be adding SYNOT’s games to our stable of great slots. They have a following all over the world and are popular with a wide range of demographics. Videoslots players know that they will always have more choice with us than at any other casino and it is great to be unveiling yet more high-quality content like this.”

Martina Hrabinska, CCO at SYNOT Games, added:“We’re very excited about agreeing a partnership with an industry giant like Videoslots. This will allow us to extend our reach in a number of core markets, whilst providing real entertainment to Videoslots‘ players.“

More on the Operator:

Videoslots emerged on the iGaming scene in 2011 and the company was developed by a group of ambitious entrepreneurs from Sweden. The operator has an excellent reputation among players and its online site has a strong focus on player safety and has been constantly revised by the authorities of Curacao, Malta, and the UK. On their website, players have access to popular slots like Jammin Jars, High Voltage Danger, Witch of the West, Realm of Legend, Summon and Conquer, Wonky Wabbits, Donuts, and more. Its distributes over 5000 games from over 150 casino providers.