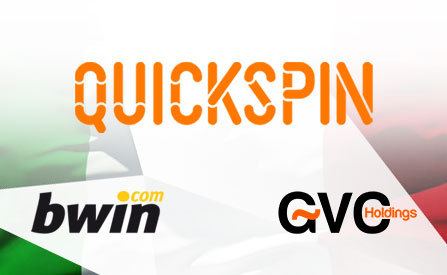 Quickspin will soon have their content available through a number of customer-facing operators in Italy, thanks to a new partnership deal signed with the GVC Group, one of the largest sports betting and casino content operators in Europe. Thanks to its status, the latter will definitely give this provider more exposure in this regulated market.

Quickspin, a subsidiary of Playtech Group, has gone live across two of GVC’s Italian facing brands. Namely, this company’s slots are now available at Gioco Digitale as well as bwin.it. Quickspin has been…

…on a lookout for partners in Italy as this company is seeking to strengthen their position in markets where they already have a presence, but also enter new regulated markets.

Having GVC at their side will greatly help them in this effort. Namely, it is a massive operator that has a presence in over 20 regulated markets. As a part of this initial agreement, they will run Quickspin’s slots via two of their brands in Italy. However, there is a possibility that the two companies will expand this partnership to cover new markets later on.

As a part of the deal, GVC will gain access to all of Quickspin’s portfolio. This will include their most popular slot games https://nodepositcasino.org/bonuses/game/slots, but also their customer engagement and loyalty tools that this provider is known for.

Achieving great success in the past, these features alone hyped up to be a great addition to its current portfolio of services.

Daniel Lindberg, Quickspin CEO, offered his insight into the new deal: “I’m extremely proud to say our games are now live with industry veterans Gioco Digitale and bwin in Italy. I look forward to a long and mutually beneficial partnership.”

Obdulio Bacarese, Director of Commercial Management at GVC, commented on the new partnership, saying: “We’ve heard really good things about the Quickspin offering and we’re very excited to be able to offer the games, as well as the Quickspin Promote tools, to all our players!”

GVC will roll out the new content through their online casinos within the following few weeks as the deal is being finalized.

Quickspin is a software development studio founded in 2011. It didn’t take long for them to emerge as a source of quality slots and other software, giving well established names in the industry a new, worthy competitor. The company has been developing slots for a number of regulated markets. However, they have immensely expanded their reach in 2016, when they were acquired by Playtech.

Since then, this studio has delivering innovative and engaging content to their customers worldwide. Despite being a part of Playtech, it is still operating as a semi-independent entity, giving it some leeway when it comes to organization and decision making. The deal with GVC represents a significant boost for this company’s reach as they are now establishing themselves through a highly competitive operator that works in key European markets.

With the Latest Quickspin Product, Nothing Will Ever be the Same Again!