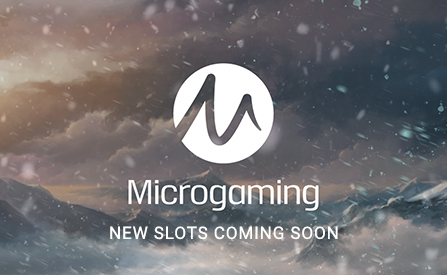 It’s going to be an epic December for Microgaming! This gigantic iGaming provider and its independent studio partners are set to release not one, not two – not even three – but FOUR new slot games in the span of two weeks!

This festive season is going to be the most vibrant ever, with new exclusive titles coming up from these prolific providers.

The roster of these holiday games will include high-quality releases that will be made available to players worldwide. The cutting-edge visuals and compelling gameplay and storytelling will provide utmost user engagement, spiced with unique features.

The first game, released on December 3rd, is Ivory Citadel…

…which was developed for Microgaming exclusively by Just For the Win. This 5-reel game has 20 paylines and is wrapped in stone, ivory and marble elements. The amazing graphics is complemented by exciting features such as extra spins, three Wild symbols and Mystery Symbols.

Rabcat has created North Storm that is going to be launched on Microgaming platform on December 5th.

The five-reel, 25-payline game has a fantasy theme to it and takes place in an ancient temple set in mountains hit with blizzard.

The lineup of features includes Bonus Falls (with symbols that form a winning combination disappear and new symbols fall down in their place), Increasing Multiplier that can reach the 8x level during extra spins.

…which is a 5x3 game with 25-payline slot. This release has stone buildings, statues and temples hidden in East’s deepest seas. The game features Rolling Reels mechanics, a Win Meter feature and a multiplier of up to 27x.

Foxium is behind the Stumpy McDoodles, that is set to launch on December 17th.

It’s a 5x4 game with an Irish theme and a party atmosphere that is packed with Stumpy Random Wilds, Random Multipliers and Foxify feature that increases the multipliers. Rainbow Re-spin can also trigger extra spins that have multipliers up to 34x.

2019 has been a particularly exciting and busy year for Microgaming, with more than 40 feature-rich exclusive new games released, including blockbuster branded titles such as the action-packed Lara Croft® Temples and Tombs™ and Village People® Macho Moves online slots. We’re looking forward to building on that momentum as we head into 2020, when we will be revealing another wave of exciting releases and announcements to shake up the new year.”