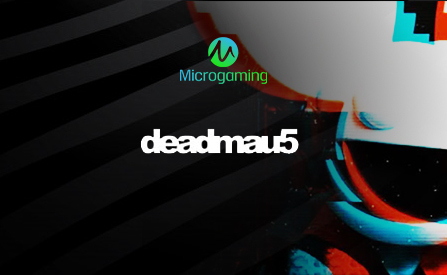 Microgaming, a premier slot game provider with a massive presence in the industry, has announced that it will be working with deadmau5 on an exclusive slot game.

The new game will be based on this popular artist’s latest tour and is expected to be something rather unique. The developer will be announcing more info on this release at ICE London 2020.

Turning up the Decibels:

Microgaming is by far one of the largest providers of slot games and other iGaming content in the industry. As such, it is fully capable of creating and publishing…

…exclusive games like the one they’ll be making in cooperation with deadmau5. While more information will be revealed during ICE London 2020, we can already glean into the basics of what’s in store for us.

Deadmau5 is a master of his trade. His music has fascinated fans from all over the world with its innovative beats and genre-defining sound. However, he is also known for…

…the visual experience his fans are treated with during his shows. This artist is capable of putting together super complex visuals that are almost as breathtaking as his music.

There is no doubt that the new slot game will bring elements of both. We are fully expecting an awesome audiovisual experience that will…

…bring the essence of the artist’s shows to the reels. His fans as well as those who appreciate unique slot game design will most likely love what this Grammy-nominated star has in store for us.

Held in the United Kingdom, ICE London 2020 will serve as the stage where Microgaming is going to make the official announcement regarding this new game.

Jean-Luc Ferriere, Chief Commercial Officer at Microgaming, offered his comment regarding the announced slot release: “The addition of deadmau5 to our sizeable branded content offering, which already includes some of the biggest names in entertainment, highlights our commitment to diversifying and innovating across our range. We look forward to launching this unique online slot to operators later this year.”

With a release date sometime during 2020, the developer will make this boutique release available to affiliated online casinos.

Microgaming is currently one of the largest slot game providers. The company was founded back in the early ‘90s and has since become an authority when it comes to iGaming software. They’ve earned this in a number…

…of ways, but mostly by developing key technologies that have propelled the industry forward. Namely, it was the brand that invented the world’s first online casino software back in the ‘90s. A decade later, it successfully released the world’s first mobile gaming software as well. Today, it employs over 1000 professionals all over the world and…

… offers a massive portfolio of slot games. On top of that, they are working with a large network of 3rd party providers who are creating exclusive slot games for this brand.