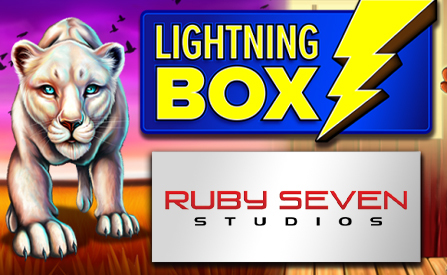 Lightning Box has decided to improve its presence on the social side of the iGaming industry.

The company has signed a significant…

…content deal with Ruby Seven Studios. By partnering up with this company, the provider is making a move for the North American market.

The Push for North America:

…goals, with one being a larger presence in the social casino side of the iGaming industry. The other goal is expanding the reach in the North American markets, more specifically those in the United States.

The developer will spearhead the deal with two of their most popular slot games. Silver Lioness 4x and the Chicken Fox will go live across Ruby Seven Studios network of online casinos that serve the social casino side of the industry.

Patrons of Lucky North Casino, Best Bet Casino, and TropWorldCasinowill be among the first to try out the new games.

Michael Carpenter, CEO at Ruby Seven, commented on the deal: “We are truly pleased to offer this talented team’s exciting games into all of our casino partner apps and websites.”

Peter Causley, CEO, and co-founder of Lightning Box, was also quoted saying: “I met Michael six years ago in San Francisco at GiGse and after many twists and turns for both of our businesses, it is great that we’re finally working together. I’m confident the two games that are due to go live with them later this year, Chicken Fox and Silver Lioness 4x, will prove equally as popular as the other games we have launched in North America and continue to expand our operations there.”

This new deal represents the second prong in the multi-prong approach Lightning Box has taken in order to get established in North America. Namely, they’ve signed with Loto Quebec in late 2019, as well as the British Columbia Lottery Corporation.

Lightning Box is a slotgame specialist studio from Australia that has been constantly working on building immersive and innovative games. So far, the audiences in numerous key regulated markets around the world are able to enjoy this company’s games thanks to aggressive promotions and content tools.

Working with the studio will add a solid boost to this social casino’s portfolio. It understands how to create games that both bring the entertainment value as well as meet the strict standards of graphical innovation that the modern markets require.

The company currently works with a wide range of operators around the world. Much like many of their peers, this slot game provider is looking to expand in the US.