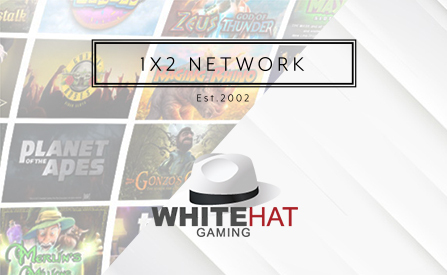 …start offering 1x2’s games to its customers all over the world. On top of that, it will also be offering 3rd party games available through 1x2 Network.

The new deal signed between these two entities will…

…allow White Hat to access the entirety of 1x2’s slot games. On top of that, the company will also be offering games from its growing content aggregation platform. The Network is a part of a larger system that includes Iron Dog studios, Leap Virtual Gaming and 1x2 Gaming. The content from all of these entities is available through the brand’s 3PI content aggregation platform.

With this deal signed and sealed, White Hat’s own platform will be merging games from 3PI, thus boosting the overall offer of this company. Some of the games that 1x2 Network will deliver include Blood Queen, Battle Maidens, Viking Wilds, Pirate Kingdom Megaways and others.

Kevin Reid, Chief Commercial Officer of 1X2 Network, shared his take on the new deal: “We are delighted to have partnered with White Hat Gaming, a company we regard as one of the most reputable platform providers in the world. This deal will propel our popular online casino and RNG content onto more brands and to more players than ever before.”

Mike Dearling, Head of Games at White Hat, offered a comment regarding the partnership: “We have built a reputation for offering one of the largest portfolios of quality online casino content which is why we wanted to add titles from 1X2 Network’s 1X2gaming and Iron Dog Studio brands. Their games have soared in popularity in recent months thanks to their incredible design and entertaining gameplay.”

1x2 is an independent software provider that was founded in 2002. The company started out as Football 1x2 Ltd, only to change its name later on as it grew into a large corporation. It has pioneered the iGaming content since its foundation, bringing innovative technologies to the industry. The 1x2 brand also includes several standalone studios, including the Iron Dog Studio.

Aside from its gaming content, this company also runs its own content aggregation network called 3PI. As of right now, its team is at the very forefront of HTML5 development, while they also offer a strong suite of table games as well as sports games.